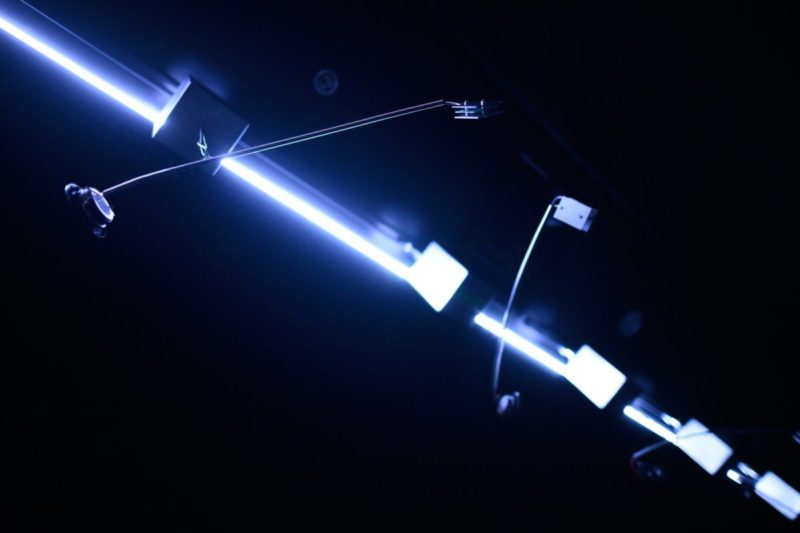 “ANH-00” is a device that collects sounds from the installed environment, autonomously generates new sounds that naturally fill empty frequency bands in the environment, and outputs a variety of sounds, including sounds beyond the audible range, from multiple speakers at varying times. It creates a rich soundscape in real time that cannot be achieved with a system that simply records and reproduces natural sounds, but is adapted to the sound environment in which it takes place.

Each agent is equipped with a simple FM synthesizer as a voice generator. The parameters of the synthesizer have evolved through a genetic algorithm that allows agents to communicate with each other through sound, creating a separation of sonic niches. The speech timing and patterns are based on the ALIFE Engine® dynamics engine. The phenomenon created by the communication between multiple ALife agents and their interaction with the sonic environment is the building block of the soundscape that this system creates.

The Acoustic Niche Hypothesis proposes, in a mature ecosystem, the signings of species occupy unique bandwidth, frequency and positions in time to avoid competition.

The term “niche” refers to the concept of biology in which environmental factors and living resources inhabit the environment in which a species of organism lives. In other words, for wildlife, evolving to communicate more efficiently through pronunciation and vocalization may have resulted in the segregation of sound niches in certain local environments and time periods.

In urban areas, where a wide variety of species do not exist, the bandwidths of sound produced by the species (including sounds that exceed the upper limits of the human audible range) is greatly absent so that this may have a physiological and psychological impact on human beings who originally lived in nature.

This site uses cookies. By continuing to use this website, you agree to their use. I Accept